When I think of the beauty of dropping one’s guard and engaging the body in its entirety through the somatic practice, my mind often wanders towards the complex workings of the mind. After all, nothing changes on the outside during the practice; it is the subtle overturning of a rock in the mind that causes infinite variation in the body’s movement. When I began classes with Professor Johar I thought I would be leaving my major in Psychology at the door. I thought that while academia has a space within a performance, it is not vital or essential for practice. However, as I started to become accustomed to releasing my body to the somatic practice, I realized that several of the theories I was studying provided a very rational foundation for my actions. I thought it would be interesting to try and apply some psychological theories and concepts to examine the work of the body in performance.

To begin with the somatic practice itself, at times my being will be completely engaged and surrender itself to the body. However, at other times I find it hard to even imagine this other state and I am unable to access it at all. I am unsure of what exactly it is that plays this vital role in the mind that results in one of these two states. Upon analyzing it further, the role of attention seemed vital to me. Not in the sense of focus, as often I find I have performed the practice the best when my mind has gone away on a different tangent, but in the sense of what is currently occupying the mind. It has been found the mind is unable to hold more than seven (plus/minus two) items at any given time (Miller 1956) and I believe the nature of these items play an especially powerful role. If I have highly distracting yet performative elements playing through my mind, my attention will simply dissolve into them and I will be able to carry the practice out beautifully. However, if these elements are interruptive or in any way demand my unwavering attention I am unable to give myself into the somatic practice. Thus, before entering class I always try to set my mind upon a quietly performative path that cares nothing for the external world but harps upon the internal.

I believe the influence of attention spreads to other domains as well. In another class, we began by opening our eyes and tried to maintain the practice despite visual distractions. The role of in-attentional blindness, the phenomenon of not perceiving a stimulus right before your eyes unless you are paying attention to it (Mack 1992), is greatly heightened. While trying to occupy the space of Shakuntalaand attempting to see through Anusuya’s eyes we were asked to mentally sketch her entire surrounding and the atmosphere and the context of her surroundings (Excerpt from practice session). I tried to pick up on the factors of sexual oppression and isolation. To translate these mentally was hard enough; opening one’s eyes posed a very real threat to the fragile construction of this scenario. When I did finally open my eyes; however, the illusion remained completely intact. Everything I saw seemed to be cast in the colours of my mind’s architecture, both natural and unimportant. I think this happened because somewhere I believed the Anusuya would simply not see the things that my eyes were seeing, so my brain simply ignored and replaced them. The feeling of being unanchored greatly helped me access this alternate vision, which both filtered and coloured the world around me. When I tried to fall into this view outside practice it was not possible, therefore, the two phenomena seem closely co-dependent.

A similar thing happens to the auditory input during the practice. The room is filled with a wide range of sounds – the Professor’s instructions, the fans, noise from other performers, my own breathing etc. The process of selective attention states that at any given time we tend to focus our attention on one or few tasks rather than the entire mass of stimuli we are being exposed to (Pashler 1998). A study conducted using opposing different auditory stimuli presented to both ears proved that at a time an individual will only be able to hear one or another. Thus, at most times in class, I am able to isolate only the important sources of sound, that is the professor’s instructions and ignore the other numerous noises. This is especially useful when one is lost in the somatic practice, as then the information seems to reach you unconsciously with little or no effort from the side of the performer. Unfortunately, in the absence of competing sounds, only the interfering noises reach the ears and it is very hard to block those out, especially during exploratory or new forms of practice as the body attempts to remain as open as possible. Strangely enough, it becomes easier to concentrate in the presence of multiple noises and sounds, when the room is bustling than in the presence of only one sound.

I have found that memory also, quite obviously, plays a significant role in performance as a whole. In the practice itself it is both an aiding and a detrimental force. In the book Make it Stick: The Science of Successful Learning (2014) Brown and colleagues speak of various tried and tested methods for acquiring and maintaining knowledge. They write of massed learning or the repetition of a single or a set of actions. They claim that while this feels more familiar and comfortable, the mind is actually learning nothing new and will easily forget the actual practicality (here the impetus) of such actions. While I try to keep my practice varied and refreshing, the body does fall into familiar patterns of movement. Specifically while trying to construct my solo piece; it became very hard to carry forth the actions with the same wonder and inspiration with which they had first been created. Furthermore, the memory of the epiphany that had first accompanied the actions kept pre-emptively exciting the mind, and this excitement in turn broke the mind’s focus.

Brown’s book goes onto talk about how varied practice helps carry out every action with greater precision and refinement. Therefore, I must attempt to understand the nuances and different demands of the different instructions better to provide myself with a more wholesome experience. I believe that learning techniques and memory contribute greatly to the ability to drop the guard as well. While dropping the guard should be spontaneous on the spot experience, spontaneity also needs to be learned. To find the impetus that allows the self to discard self-consciousness and embarrassment each time can be extremely difficult or even feel impossible; hence, it must be practiced regularly.

If one were to look at the procedure of scripting as well, often when we start the mind races ahead of conscious thoughts and we find the narrative constructed to much greater detail than we were aware of. While we tend to link this to an epiphany, where we believe after no progress the mind has suddenly constructed a conclusion, this is incorrect. In truth the mind has been working on the narrative the entire time, putting together the different elements like pieces of a puzzle. This process known as incubation (empirically proven by Smith and Blakenship 1989) continues even through sleep and other effortful cognitive processes one may be engaging in. Thus, after reading the required section of Shakuntala or once rehearsing my solo, my mind went to extensive work to fill in all the details and provide itself a route to reach its desired destination without fail. Going back to the earlier instance of opening my eyes during Anusuya’s enactment, the entire scenario was perfectly recreated.  As instructed by the Professor, when we ‘awakened’ into Anusuya’s ashram life by opening our eyes, the mind had immaculately constructed the smallest details to ensure that the mental world was kept intact and not shattered. (Excerpt from practice session)I think because the thought of opening my mind had earlier worried me as well, my mind had made sure to eliminate any space for distraction or misunderstanding.

Memory is the one tool used majorly in a performance that is of course an essential cognitive process. It forms the foundation of performance and higher cognitive processes, linking the two studies firmly.  In performance, memory enables the self to continuously build towards something new, without having to constantly regress back to the basic level of beginning. It provides a backbone from which the performer may draw strength and believe his or her actions will yield the desired result. Strangely, one of memory’s biggest cognitive flaws works very advantageously in performance. The creation of false memories aids a performer in relating to a repeated stimulus with genuine emotion. While the process of getting into character may not be as extreme as creating actual false memories, we still tend to have very strong associations and connections that allow us to re-inhabit the garb of a character.  In playing a character, that character’s experiences and life becomes the performer’s and he remembers them as his own memories. This can often even become very dangerous as the performer is unable to distinguish the trials and difficulties experienced by the character from his or her own experience. Thus, despite evoking a very organic, natural performance from the performer it may overpower him and dwarf his real-life experiences.

In my solo, I spoke of a bond being created between performer and observer and the vital, almost electric energy that exists there. My unscientific explanation for this very tangible connection is that at that moment the two minds, the performer’s and the observer’s, overlap, they are able to share their view and see the same essence in the performance. In literature, we often speak of “white noise” where enough confusion is created for impossible things to take place due to opposing stimuli. I believe this vital energy created between the two produces such a white noise, and the performer can make the observer believe anything he wants in that space. The only catch is that he must believe it too, not by choice but simply because no other possibility exists. It becomes an absolute truth, no matter how impossible, within that time and space. For me, this is the very core and heartbeat of performance and is a phenomenon of undeniable beauty.

Thus, the pathways of psychology cross in all manners with those of performance, and the two lend one another strength and even coherence. 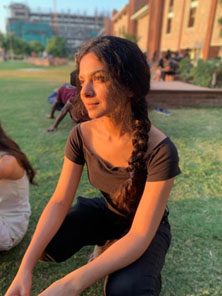 Veeha Verma is a psychology and performing arts graduate from Ashoka University. She is greatly enamoured with the pursuit of the self and spends her days trying to find new ways in which to express it through art. You can currently find her working with the Bombay theatre company on their latest digital project.