All roads into our capital are blocked by peacefully protesting farmers (since November 26, 2020); peasants, who work the land, whose palms know the taste of dirt, whose eyes can read the skies and the winds, and who know the bugs, bees, and the beasts as their friendly-foes. These men, women, and children whose nature it is to negotiate the wild are grounded in a reality that is not only remote to most of us urbanites but one that has also been progressively undermined and trivialized by all those who have fully bought into modernity’s promise of bettering, even overcoming nature.  I strongly suspect that the seeds of true-believing that the world is so greatly suffering from today, might lie in the make-belief Cartesian “truth” of mind-over-matter. Yes, I am calling categorical rationality “belief”, one that has to perforce be sustained by plain hubris and smart-talk. Perhaps the smart-Alec and the true-believer are essentially the same.

Historically, the traditional idealisms that have prevailed within our subcontinent over millennia have been content in dismissing matter as maya, calling it base, corrupt and inferior in comparison to the superiority of idea or doctrine. However, within the mind-over-matter dictum of modernity, both the idea and idealism have reached new heights, sprouted new feathers, and gained a currency, a cockiness, and a self-righteousness that makes it vie with heights hitherto only known to theology and spirituality. By valorising the idea of “self-perfectionism” modernity gives rise to a narrative of ever-betterment wherein competition, self-determination, and obliteration of all else considered “inferior” or “other” are raised to the level of high virtue.

Today, the social, cultural, and political realities worldwide constitute a variety of idealisms that are all spawned from modernity, namely capitalism, nationalism, consumerism, puritanism, communalism, fundamentalism and so on. today. And currently, the nexus between all these isms is coming into play in a manner that does not bode well for either freedom or democracy. While capitalism makes no bones about converting everything and anything into profit; consumerism keeps generating and feeding new compulsive appetites with clockwork precision, at the same time entitling the customer to feel like “God”; puritanism preaches moral and religious earnestness, recommitting the Believer to his “covenant” with God and making strife for perfection the goal of life; nationalism, from its very inception, floats chauvinistic ideas of self-greatness and imaginings of glorious pasts that did not historically transpire; and communal-fundamentalism fans these fantasies of lost glory, recommitting the subject to a hypothetical past, fuelling a supremacist zeal to reinstate the order of that imagined, illustrious past. Each of these idealisms relies heavily on narratives of loss, strife, entitlement and hope. Thus, a narrative spinning machinery is integral to the project of modernity, be it news, popular culture and/or advertisement.

Traditionally, we have known advertisers to buy space or time in all types of news media, often at exorbitant prices, in order to announce and promote their products.  We are well accustomed to seeing news and advertisement juxtaposed side by side, but within clearly demarcated boundaries. Today, these boundaries are getting blurred as the agendas of the political news-makers and the advertisers are coming to tally with each other.  Since the 19thcentury, news-media has played the role of a middle-man between the seller and the buyer. However, today, corporate-capitalism has breached the territory of the middleman and advanced to co-opt or colonise the media by now conveniently owning news-channels. The nature and gamut of their production has changed, alongside their products they also “make” news now. In other words, news is being produced.  Like consumer products, these new business-channels produce news for which first both an atmosphere and an appetite must be created. A political appetite which eventually serves capitalist dreams. The new appetite that is being invented today is that of entitlement; and for this formula, selling of “happiness” alone will not do the trick; as it is, the happiness market is long saturated. Now what gets-the-goat are narratives of loss and nightmares of fear, anger, shock, resentment, and hatred. The new market makes blood-baying trendy for the sake of righting fabricated past-wrongs and aggressing to gain entitlement.  This blatant collapse of distinctions between the agencies of news and advertisements is unprecedentedly dangerous; it takes make-belief and its corollary, true-believing, onto an altogether another level, hitherto unknown.

Each one of us today is both a product of and prey to the impact of advertisement that has succeeded in seducing and colonizing the psyches of virtually all populations around the globe. Each season, we glibly, one more time, buy into the new “dream of happiness” that the market is floating. A bite-size dream of self-betterment that compels my maid to cater to her daughter’s daily demand for Maggie noodles, because Maggie holds the promise of a Good Life! And try as I can, I cannot convince the mother or the daughter otherwise. Such is the impact of advertisement.

These dreams that you and I have been unconsciously buying into since childhood are designed to make us progressively feel both yet-incomplete and unsure of our own appetites, opinions and ourselves. But alongside peddling such unsurety of self, capitalism also must keep us hanging dangerously close to the possibility of actualising that what has suddenly become current, covetable and ideal. Keeping us in a perpetual state of tease! And in doing so it is habituating us with the “ideal”, literally bringing it into our bedrooms, making it feel commonplace enough for me to feel entitled to it, yet keeping it slightly out of reach. It is this vague desperation of unsurety mixed with the false familiarity and naïve promise of entitlement that keeps me buying into the idea of a good life in order to “belong” and be part of the “in-crowd”.

In the past, business houses have needed to join hands to create powerful lobbies in order to influence policy-making; but today, select corporate giants have become large enough in their own right to directly fund and command governments. We saw this quite plainly in the Trump Sarkar, where a leading CEO and the President of a nation were folded into one. This mergence further eases the business-house and government to self-servingly influence and support each other for mutual benefit. Shared ethnic or racial politics between the two can make this nexus even more sinister.

The media rooms owned by the corporate houses become available to like-minded political news-makers to create news and images to serve the designs of both.  Making it a win-win situation for all who have bought into a common or a mutually beneficial idea, no matter how historically unsound it might be. Just in the same manner that the idea of Maggie as nutrition or good-life is patently unsound.

After having made virtually the whole world into compulsive shoppers, fashion victims, fast-food addicts, drunks and so on, the news-brewing business-houses are now making us into compulsive “breaking news” addicts; the urgency and shrill hype of which is programmed to fleetingly eclipse our reasoning and result in a knee-jerk opinion. Opinion being the premier currency within our times of quasi-democracy. And this opinion is both orchestrated and cemented through the effective theatrics of baffle-dazzle that may fleetingly cause a lapse in reasoning between the intake and ingestion of “news”. News, like an advertisement, aiming to orchestrate a slip within the proverbial gap between the lip and the cup.

For us, then, to be responsibly politically is to be conscientious about what we consume in terms of news-products. Just like informed consumers who educate themselves about the labels they buy into, let us check if the news channel that we are subscribing to is owned by a corporate house, because if so, it is bound to have other vested interests other than providing us accurate information and objective news.  News is and MUST NOT be allowed to become the business of a vyapari who requires the media for only one thing, and that is, to advertise and sell his wares to fulfil his schemes of profit-making that categorically, if not ruthlessly, exclude both you and me.

Conversely, let us also pause to reflect on our compulsive appetites of entitlement, self-proclaimed superiority, chauvinism and our sense of correctness. Because they may not be only bloody vis-à-vis the other, but as is the nature of ALL compulsive disorders, their primary target will always remain the self. They will consume us along with our environments. We need to make pausing and posing between the cup and the lip a practice, especially when it comes to ingesting breaking-news and making an opinion.

The farmers’ demands are right and just! They are fighting for not just their little plot of land and for a fair price for their crop, or to preserve an agrarian ethos that befriends them to the generosity of the land, or the dignity, love and satisfaction that can only come from tasting the dirt in the palm; they are actually there fighting for the satta (सत्त) of matter, i.e., the innate intelligence, potency, sensitivity and beauty of matter, that includes both the land and the body, yours and mine. The farmer is rising against a toxic nexus between idealisms and governments that pave the way for a new form of governance that targets not only freedom, equality, and democracy, but eventually the planet. In short, the farmers are standing up for their rights and fighting against those who have grown to feel entitled. The farmers’ fight then is between the rights of the realists, those who believe and rely upon the integrity of matter, and the nexus of idealists who have earned entitlement, little by little, to “better” the world. In short, the fight is between reality and idea.  It is ironic, heart-breaking and infuriating that the entitled, fed only on “smart” idealism that are inherently empty and hollow of satta (सत्त) or the truth-of-the-real, who for generations have progressively lost the sense of leaving alone the land but even their own bodies, are there proposing policies of smart reform without the consultation or consent of those who love and know the land like the back of their hands.

Those habituated to the vapidity of Maggie noodles and ideas of converting Indian cities into Singapore, may perhaps have knowledge of the greens on their plate,butwould be ignorant of the lure of the open skies and the sway of the wide-open fields that accompany the colour green. Today, the colour green and all that it stands for is what is in danger. Like Simarjeet Singh, one farmer at the morchaquite aptly puts it, “asiitthebimarmaa di khatir lad rahehaan”; we are here fighting for the sake of our ailing mother, our planet earth. The fight today is for life, the life and health of our planet, to keep alive the soothing lure of the endless blues of the fleckless skies and the teasing greens of the lushly dancing fields. And this fight is not that of the farmer alone! 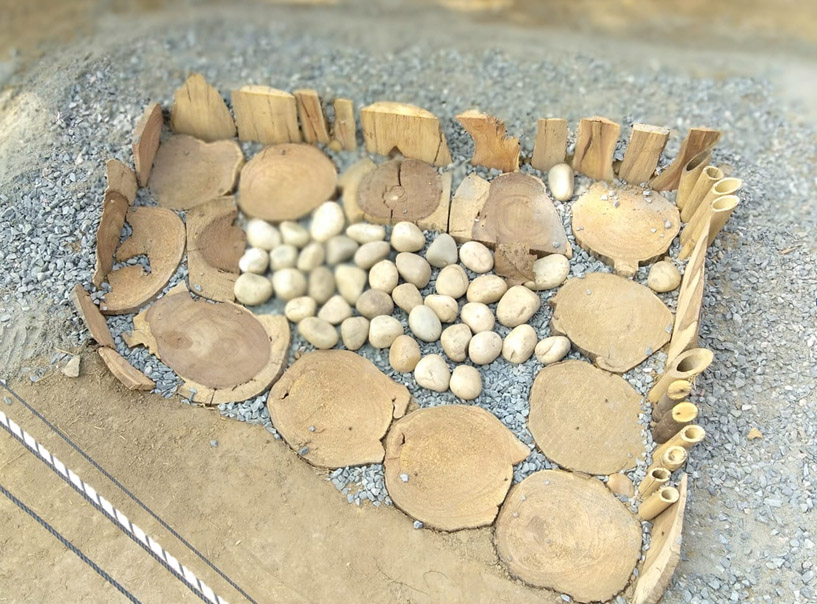