BARPS is a method to practice yoga asana, but with a difference. Over almost the last hundred years, Modern yoga seems to have roughly branched out into two directions. Whereas one branch, mainly stemming out of schools like the Krishnamacharya Yoga Mandiram (KYM), founded by Sh TKV Desikachar, that I am a part of, uses yoga to therapeutic effect; most other schools offer more standardized and fixed routines that keep getting progressively more challenging and complicated. Correctness of form has also come to become the popular criteria of asana practice today, with the perfection of form becoming the aim.

I was only taught yoga one-on-one at the KYM, as the practice, there is always customized and finely calibrated keeping in mind the abilities and limitations of the individual. Even if I have not had the luxury of teaching one-on-one I have adhered very closely to this method and attempted to nuance it in my ways.

Through the decades my understanding and appetite for yoga have also evolved and changed, and I must add that it has also become influenced by my Bharatanatyam practice. Today, if I practice yoga, it is because it attends to some inner calling for a state of absorption that only an embodied engagement of breath, body, and mind can bring about. I feel the KYM method has mastered a method in orchestrating an absorptive experience through practice. But this experience is often short-lived and gets taken over by the preoccupations of the body and mind. So, I have often wondered where to take practice after the absorptive experience has been effectively orchestrated. In time, I sensed that this condition perhaps needs to be variously inspired for attention to be accessed and satiated within its numerous dimensions, the physical, psychological, emotional, elemental, spiritual, and most of all poetic, for it to remain unfazed in the face of distracting preoccupations and compulsions. 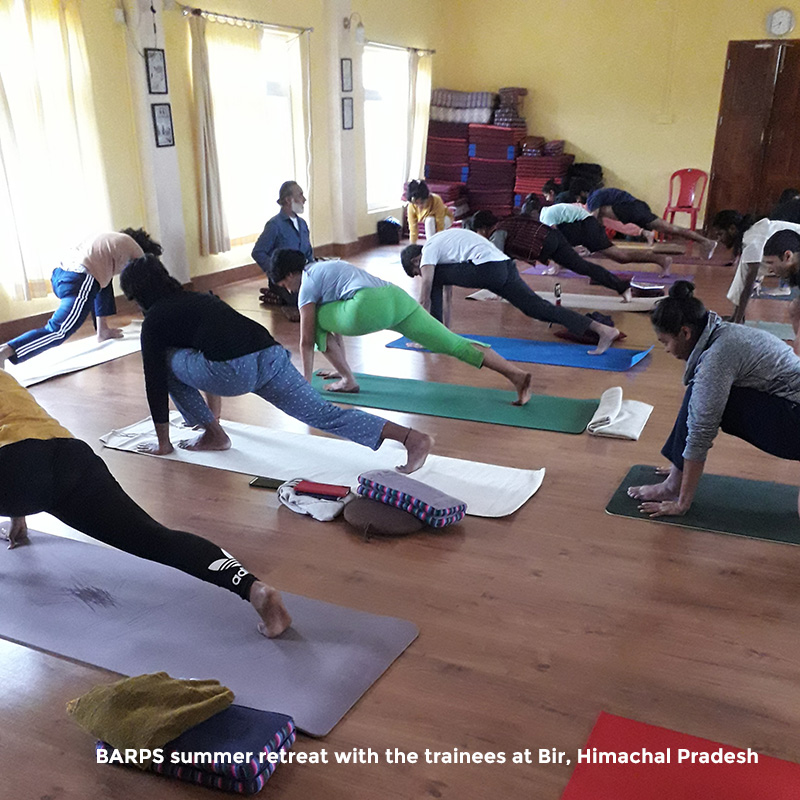 Apart from the KYM, my personal practice is also deeply inspired by the Vijnana Bhairava Tantra, an 8th century, Kashmir Shaiva text, that offers a variety of visualizations or dharanas to suggestively engage, direct and absorb attention. I could say that this text has directly informed the BARPS method that relies upon the suggestive power of keywords.

The first module of the BARPS TTC included a detailed reading of the Samkhyakarika, a fourth-century text that directly informs Patanjali’s Yoga Sutras. Samkhya is determinedly silent on the idea of God and rests all possibility of inner transformation, even enlightenment, within the distilling processes of materiality. Also, interestingly, it considers the mind, and all that is contained within it, namely thought, idea, concept, imagination, including ego and intelligence to be all material. And thus when it speaks of the material body, it also includes the mind, ego, and intelligence. Another point of note is that it cannot thus entertain or accommodate the Cartesian divide between body and mind that has come to rule modernity. For it, the body is neither fully devoid of intelligence nor something that needs to be continuously corrected, reformed, tamed, and mastered; words that are central to colonialism and its methods of control. However, all these terms along with their accompanying attitudes have become synonymous with the practice and teaching of Modern yoga, particularly its standardized variety. But we need to remember that these can never lead to, or even allow, freedom, liberation, and authority that constitute the very purpose of yoga. The way I see it, such an approach is an antithesis of Raja Yoga that we all claim to practice in some form or the other because it fundamentally dishonors the sentient body. 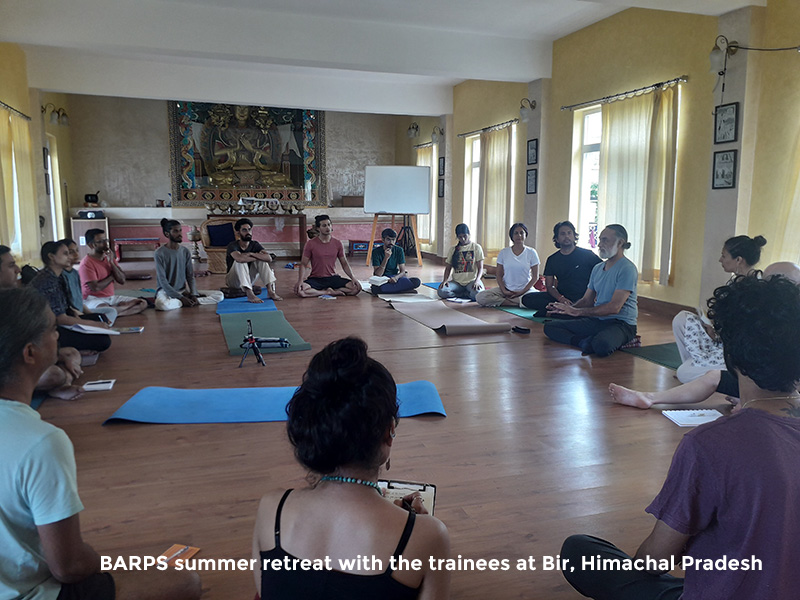 Its primary focus is “attention” which could be termed as the aggregate of all that is transpiring within the body at the moment. The method then focuses on not only honing intelligence, facilitating creativity, and attending to the sensitivity of the body but also honoring its inherent appetites; the deepest or subtlest of which I feel is the appetite for absorption. And it is important to attend to all these as they all directly inform and influence the quality of attention. Attention in itself is formless but mercurial, though, on one hand, it reflects the inner condition, on the other; it can also be influenced by external objects, gross or subtle. Thus, it is like a conduit between the inside and the outside. It takes on the form of any object that it attends upon, e.g. if I look at or think of the moon, my attention in turn will also become “moon-like” as it will simultaneously elicit and awaken the moon-ness within me. Abhinaya in Indian dance thrives on such mirroring faculty of attention. Influenced equally by my dance and yoga practice, BARPS is designed to deliberately orchestrate and then ride upon this mirroring interface between the reciprocal body and the evocative image, or to be precise upon the exchange between the responsive body and the suggestive word. Within the safety of a trusted practice, each time the body becomes reciprocally responsive to suggestion, it may open itself to resift and reconfigure itself virtually at a cellular level; a sensory re-sifting that may allow attention to settle deeper and secure itself within even-subtler dimensions. It will be of note here, that the prime aim of Samkhya and Yoga is to gradually distill attention for it to eventually become absorbed in the irreducible, immutable, primary Cause of creation, i.e., the Mula-Prakriti.

Over the last few years, I have repeatedly said in my classes that the body is not alone. It is in a relationship with something other. Just like Purusha is to Prakriti, there abides within the proximity of the body and its spiritual/poetic other, which may be subtly felt, suggested, and even realized. And one for which the body has an innate and abiding appetite. It is yoga that may appease this appetite of the body for its spiritual companion.

On the physical plane, the BARPS method involves techniques of asana and pranayama, both gentle and rigorous, as practiced in the KYM tradition. Commonly, most of us, unless we have aspirations of becoming asana champions, follow a limited repertoire of asanas comprising standing, supine, inverted, prone, and seated poses within which we may bend, arch, stretch, and twist. With excessive attention paid to the perfection of form today, the complementary relationship between the body that is athirst and it’s other that can only be suggested, at best, can easily be overwritten. And it is towards this purpose, to guide attention to both dwell within the subtle appetites of the body and to become open to suggestions, for the sake of an absorptive experience, that BARPS layers the practice of asana with a series of evocative keywords.

Just as suggestion works within poetry to evoke and experience the ineffable, the keywords may succeed to detect and recognize subtle appetites embedded within the body and also facilitate an evocative interface between the material and the spiritual, the somatic and the cognitive mirror-halves of the body resulting in an experience of absorptive resonance. Some of the keywords that BAPRS practice puts into use are bracing, buoyancy, appetite, availability, agency, reciprocity, rigor, preparation, permission, pause, poise, sensing, slowness, suggestion, surrender, sound, silence, spaciousness, and so on.

The theoretical component of the second module includes a detailed, sutra by sutra, reading of the first two and a half chapters of the Yoga Sutras; like the Samkhyakarika course, this course too is being co-taught by Navtej Johar along with Sanskrit scholar, Dr Rishiraj Pathak. The module also includes an introduction to and a practice of dharanas from the Vijnana Bhairava Tantra; as well as a course in the History of Modern Yoga that is designed to identify and address the impact of modernity upon yoga, namely the artificiality of the Cartesian divide between body and mind, that holds mind superior to the body; the overarching idea of “order” with which modernity organizes everything into distinct categories to create hierarchies and control, leaving no room for the abstract of the luminal; the idea of reformation vis-à-vis the body, as though it is originally damaged and immoral, even sinful, and needs to be tamed; and the rather violent ambition of physical and moral perfectionism.

BARPS is a way to steer clear of these body-dismissive ideas of modernity, create a safe and resonant place of sensitively and truthfully engaging the body, honor its subtler appetites for absorption, and effectively disable the inner voices of self-policing, self-moralizing, self-rejection that the perfectionism of modernity and post-colonialism have unleashed upon our psyches.