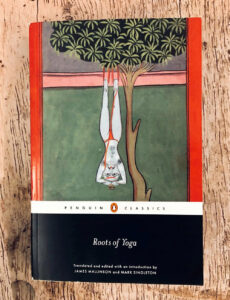 Over the last three decades, there has been an enormous increase in the popularity of yoga around the world. The United Nations’ recent declaration of an International Day of Yoga is symbolic of yoga’s truly globalized status today. Along with this globalization, however, has come metamorphosis: yoga has adapted to social and cultural conditions often far removed from those of its birthplace, and in many regions has taken on a life of its own, independent of its Indian roots. The global diffusion of yoga began at least a century and a half ago, since which time yoga has continued to be refracted through many new cultural prisms, such as New Age religion, psychology, sports science, biomedicine, and so on.

In spite of yoga’s now global popularity (or perhaps, rather, because of it), a clear understanding of its historical contexts in South Asia, and the range of practices that it includes, is often lacking. This is at least partly due to limited access to textual material. A small canon of texts, which includes the Bhagavadgītā, Patañjali’sYogasūtras, the Haṭhapradīpikā and some Upaniṣads, may be studied within yoga teacher-training programmes, but by and large the wider textual sources are little known outside specialized scholarship. Along with the virtual hegemony of a small number of posture-oriented systems in the recent global transmission of yoga, this has reinforced a relatively narrow and monochromatic vision of what yoga is and does, especially when viewed against the wide spectrum of practices presented in pre-modern texts.

Of course, texts are not reflective of the totality of yoga’s development – they merely provide windows on to particular traditions at particular times – and an absence of evidence for certain practices within texts is not evidence of their absence within yoga as a whole. Conversely, the appearance of new practices in texts is itself often an indication of older innovations. Despite these limitations, however, texts remain a unique and dependable source of knowledge about yoga at particular moments in history, in contrast to often unverifiable retrospective self-accounts of particular lineages. In addition to texts, material sources, particularly sculpture and painting from the second millennium CE, provide invaluable data for the reconstruction of yoga’s history. While we have not addressed such sources directly here, they have informed our analyses. Examples of our work with such sources can be found in Diamond 2013.

In some respects this book resembles a traditional Sanskrit nibandha (scholarly compilation) in that it gathers together a wide variety of texts on a single topic. Unlike a nibandha, however, our approach does not have a sectarian religious orientation, and it will, we hope, be somewhat more accessible as a result. The material is drawn from more than a hundred texts, dating from about 1000 BCE to the nineteenth century, many of which are not well known. Although most of the passages translated here are from Sanskrit texts, there is also material from Tibetan, Arabic, Persian, Bengali, Tamil, Pali, Kashmiri, Old Marathi, Avadhi and BrajBhasha (late-medieval precursors of Hindi) and English sources. This chronological and linguistic range reveals patterns and continuities that contribute to a better understanding of yoga’s development within and across traditions (for example, between earlier Sanskrit sources and later vernacular or non-Indian texts which draw on them). Where possible, we have used the earliest available textual occurrence of a particular passage, rather than a later duplication. For this reason, perhaps better known but derivative texts, such as the later Yoga Upaniṣads, are passed over in favour of the earlier texts from which they borrow. By and large we have not included material which is incidental to the mainstream of yoga theory and practice in South Asia, nor do we draw on non-textual sources popularly considered to be fundamental to yoga’s history, but which have been discredited by scholarship. Indeed, this collection benefits enormously from advances in historical and philological research in yoga traditions over the past three decades.

The yoga whose roots we are identifying is that which prevailed in India on the eve of colonialism, i.e. the late eighteenth century. Although certainly not without its variations and exceptions, by this time there is a pervasive, trans-sectarian consensus throughout India as to what constitutes yoga in practice. One of the reasons for this is the rise to predominance of the techniques of Haṭhayoga, which held a virtual hegemony across a wide spectrum of yoga-practising religious traditions, including the Brahmanical traditions, in the pre-colonial period. The texts included in this collection reflect this historical development. As well as delimiting what would otherwise be an unmanageable amount of material, focusing on yoga as it was most commonly understood helps to reflect the actual practices of a majority of traditions in which yoga was undertaken. Such a focus can also help shed light on the immediate predecessors of the nineteenth- and twentieth-century yogis who helped disseminate yoga around the world.

The material represented here is largely practical in nature, not philosophical. In general, we do not include passages on metaphysics unless they are directly related to practice (e.g. meditation on the elements (tattvas)). Although traditional yoga rarely, if ever, occurs outside of particular religious and doctrinal contexts, these contexts vary considerably, while yoga itself retains essential theoretical and practical commonalities. We therefore focus mainly on the practice of yoga and not on the philosophical systems that may underpin this practice in its specific sectarian settings. In addition, a distinction needs to be drawn between yoga as practice, as found across a wide range of Indian traditions, and Yoga as a doctrinal or philosophical system rooted in traditions of exegesis (i.e. textual interpretation) that developed from the Pātañjalayogaśāstra. Notwithstanding the popular notion that the Pātañjalayogaśāstra is the fundamental text of yoga, and fully recognizing its enormous impact on practical formulations of yoga throughout history (in particular Haṭhayoga, with which it is sometimes identified in texts), it is in fact a partisan text, representing an early Brahmanical appropriation of extra-Vedic, Śramaṇa techniques of yoga, such as those of early Buddhism (on which, see here). Its long exegetical tradition is not one of practice but of philosophy. Although this exegesis is vital to understanding the development of metaphysical speculation in South Asia, particularly in orthodox contexts, it is not our focus here, in that it does not significantly contribute to a history of yoga practices. Those interested in the philosophical traditions associated with the Pātañjalayogaśāstra should consult Philipp Maas’s forthcoming sourcebook of yoga’s ‘classical dualist philosophy’.

Finally, it is worth pointing out that this is not a manual of yoga practice. It is a work of scholarship documenting a wide range of yoga methods, a few of which may cause injury or illness, and some of which may even lead to physical and/or cognitive ‘death’, if practised successfully. The reader undertakes the practices described in this book entirely at his or her own risk.