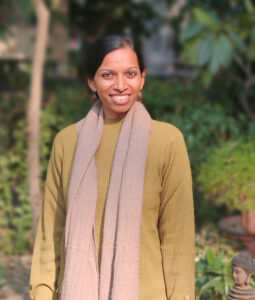 As the story of any Bharatanatyam dancer goes, I too started learning from ‘the tender age of three’. I first learnt adavus, the basic foot and hand movements coordinated to rhythms and meters. Then came the repertoires like alarippu, jatiswarams, sabdams, varnams and more. At the risk of oversimplifying, one can broadly divide all the repertoires into two categories: one as rhythm centered jatis/ korvais i.e. adavus pieced together to embellish a composition; and the second which is emotive in nature, commonly termed as abhinaya. In Chennai, where I studied Bharatanatyam, abhinaya was colloquially called ‘Kai’ literally meaning the hands. Kai when taught meant the hastas and hand gestures which accompanied the emotions. Although it was always only the hand gestures that were taught, the assumption was that along with the right hand gestures, the students get right moods. As I started pursuing Bharatanatyam as a career, I realized kai made the most difference in thoughts and performances.

Kai was first introduced to me in the repertoire sabdam. Sabdams are short compositions which have a mix of both korvais and abhinaya and usually set to the ragam of Kamboji and to the meter of seven. My teacher felt that sabdams were important as they interlude between rhythmic repertoires and abhinaya centered repertoires hence laying the basics of kai. My teacher taught me two kais for each of the prose sections and they were the literal meanings of the prose too. When learning the varnam, the kais were expanded from literal to suggestive and it could go up to any number of kais! My first dance teacher emphasised that I use the exact kais she taught me but I later learned that kais were completely up to me and my manodharma[i]. A common practice among teachers was to teach similar kais to all their students, which is then passed and carried on by the students. It becomes part of the dancer’s lineage which is often revisited with a sense of pride. Kais are a form of carrying one generation’s aesthetics and societal views to the next. In a way, choreographed kais can be equated to performative history and even historiography. Kai becomes an important medium of both the language of Bharatanatyam and of practitioners of this form. It has the agency to negotiate one’s social and political standing.

I would like to elaborate with the example of a popular javali Parulannamatanammavadhu written by Dharmapuri Subbaraya Iyer. In this 19th century composition, the heroine states that the hero shouldn’t listen to anyone else (later in the composition the composer clarifies that the heroine is specifically talking about a woman) and towards the end pleads to him to act according to his Dharma. This javali in a nutshell brings together ‘Indian values’ in an age-old traditional form of Bharatanatyam, where the heroine guides her hero (who is also a leader according to this composition) to act according to his Dharma and ridicules the other woman by calling the woman a witch who has drugged the hero. I have seen many renditions or rather kais performed and they can broadly be classified into two moods: utmost bhakti towards the hero who has innocently swayed from his ways due to the vile witch; and the other as sardonic hasya towards the hero who has shamefacedly returned to the heroine after being with the other woman. In both the interpretations, the other woman is not spared any aspersions but in only one the hero is also blamed for his mistake.

The first interpretation is mainly propagated and practiced by the revivalists of Bharatanatyam or their students. For instance Bragha Bessell, a student of Kalanidhi Narayanan, the renowned abhinaya guru; choreographs, performs and teaches kai which infuses spirituality in almost all compositions. There is always a touch of sacredness to the form and to the moral values surrounding the form. This interpretation and kais are performative of the modern thoughts influenced by colonialism and nationalism. Embodying a woman who lovingly informs her husband of his duties and abiding by him under any circumstance as the duty bound wife are classic examples of embracing morality which were propagated during nationalism. In other words, the performers superimpose their thoughts of the ideal, moral woman onto this composition via the kais. A carefully curated kai can give the artist the freedom to perform the most ‘indecent’ compositions and yet play the role of an upstanding Indian citizen who follows traditions.

The second interpretation which is not much in vogue is performed by students of hereditary community artists. The only performance I have seen was by Narthaki Nataraj, a student of Kittapa Pillai. Her kais are steeped in the scathing anger of the heroine. My teacher, a student of K J Sarasa and Pandanallur Kalyani grand-daughters, strongly felt that the composition is scornful owing to its musicality and pace. This interpretation is sometimes considered wrong as the heroine is not the ideal, dignified woman, but rather profane or vulgar for mocking the hero[ii].

Can the interpretation also lie with the value systems followed by the individual performers? Narthaki Natraj and my teacher who use the second interpretation have broken norms in their own fashion; hence there is a higher possibility of them not following the values propagated in modern Bharatanatyam. The performer who enacts the heroine exercises complete control to act as the perfect woman role model who attends to her hero and is above the other woman in comparison. They are forgiving, pleasing, and respectable. Towards the other spectrum is a woman who refuses to hold back and not an ideal role model material. The performers can either be the calm and dignified woman or a taunting woman who is willing to laugh at her hero’s expense; these characters also signal their off-stage personality. A woman who disrespects the hero is considered obscene on-stage as she is of lower status; while the off-stage personality of the performer who chooses to embody this woman is also affected as they are defying the norms of embodying the ideal. These are some of the values propagated in Bharatanatyam. The kais start to dictate the kind of woman the performer embodies on-stage and off-stage; a binary which hasn’t been taken lightly. All moralities considered, kais continue to hold immense power because of social positioning of a woman. The question remains whether it is moral of us as a society to continue this binary rather than embracing and accepting all characteristics of the woman who may not be ideal and perhaps even ‘bawdy and vulgar’.

Kuzhali Jaganathan is an arts administrator and a dance practitioner. She takes immense interest in studying cultural practices, its reflection, and implications in arts and literature. She was part of the Body in Indian Modernity course offered by Navtej Johar.

i”Manodharma, as explained by my subsequent teacher, is the extemporaneous performance which is carefully cultivated with practice but spontaneously synthesises ‘in the now’ with music, time, space and people.”

ii”According to the many categories of women mentioned in Natyasastra, a woman who doesn’t abide by her hero is considered lower (Madhyama or Adhama). After the revival of Bharatanatyam, nayikas from Madhyama and Adhama were either not practiced or were changed to the superior (Uttama) as they were considered obscene and not spiritual to be placed on-stage.”