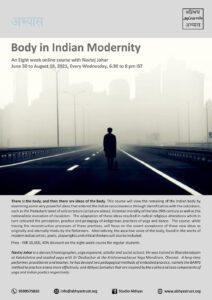 The body is not one thing! While on one hand it is container and a site of subjectivity, it is parallelly, a means of action and engagement with the objective world. And because of this dual status of both being a noun, i.e., a container of conditions, feelings, expectations, experiences, and memories, and equally a means of action or verbing, i.e., doing, tasking, performing, posturing, projecting etc., the body-as-container has historically never quite been left alone. It gets continuously burdened with ideals, notions, aims, goals, targets, norms of correctness, stances, and ideas of how it ought to become, act, be perceived, perform, produce, or regulate itself in order to maintain its lawful place within the larger sociocultural design.

Thus, the body has been infinitely overwritten. Every family, culture, sub-culture, social and political order, religion, cult, regime and so on fosters rules, norms, slogans, values to overtly and/or discreetly direct the body to both be and perform in a certain manner. What we also need to register is that the container body and the performative body may often, unless consciously checked and judiciously tuned, remain at odds with each other; the latter constantly rendering the former unstable and unsure of its innateness, i.e. its proclivities, desires, inner-prompts and spiritual callings. As I prepare this course, I realise, that we cannot talk of the body without addressing its inner callings; thus, spirituality is integral to the discourse of the material body.

The attempt of designing this course and curating its reading list seems a little arbitrary and random, as there are so many types of contexts and bodies that we can talk of within the Indian subcontinent. At the very outset, I would therefore like to state that this course will offer a rather rudimentary map of the influences that the “pan-Indian” body has more-or-less been subject to over the last two hundred or so years. Hopefully, this course will lead to a more focused and detailed reading of some specific aspects that we will be touching over the duration of the course.

Within the eight-week course, I will begin with a discussion on “received duties” as per the Vedic social structure, Mimamsa and later Vedanta. Culturally, these duties directly dictate the performativity of the body, and while they promise to secure the spiritual container, they assume an unresisted acceptance of hierarchies which may be even deemed by some as unfair and even violent. And then the question arises, how does the container-body choose to contain and contend with the conflicts that ensue out of the dharmic duties and their ramifications? Using this as a primary grid of our sociocultural conditioning, in week 2, we will jump right into the late 18th and 19th centuries, to the advent of modernity into India, which brings in its wake not only the spirit of Capitalism but also a Protestant work ethic; a shift that is brought about through colonisation and introduces a new variety of “tasks set by God.” This will bring us to focus on the advocacy of Swami Vivekananda, particularly in the areas of work, ethics, muscularity, strength, self-will and so on. Because all these new ideas of progressive engagement with the New World make modernist demands upon the body and also implicate it within a larger Protestant framework.

Week 3 will focus of the gradual formation of Indian Modernity that further unleashes a slew of new political ideas, that of secularism, democracy, nationalism etc., all of which hinge on the self-consciousness of identity. Interestingly, Indian nationalist slogans like “unity within diversity” again rest on a presumption of unresisting bodies agreeing to come together under a larger umbrella of what the Indian nation is defining itself to be. The underlying question of our discussion being, how do different sets of bodies choose to contend with the unrest and violence that simmers under self-proclaimed/imposed definitions of self and identity?

In week 4, we will focus on the majoritarian dream of the Hindu Mahasabha which seeks to both unify and masculinise the Indian nation. A methodical project that is projectionist in nature and entails the careful circulation of slogans, imagery, processions, spectacles and stances that seek to redefine both Hinduism as well as the role of its ideal men and women. What we will try to decipher and detect through the readings is the blurring of the narratives of pan-Indian secular nationalism as well as those of the sub-nationalisms that may be parochial and/or communal in nature.

In weeks 5 and 6, this will open up questions regarding the position of women. Beginning with the laws of Manu we will go through moralising guidelines popularised by the Gita Press and study the image and the role, often suggested in subordination to their men, in the first half of the 20th century. In week 7, we will talk about the ways in which both Indian classical dance and yoga are re-envisioned and reconstructed gradually converting into prominent modes of cultural exhibitionism which is not free of chauvinism; and in week 8, we will conclude by studying the popular images of “being Indian” circulated through calendar art as well as the works of Raja Ravi Varma.

The main thrust of this course is to begin to trace a trajectory of imagined pasts that are purely fabricated and historically unsound, that initially served the purposes of the secular-modernist nationalists but which then got absorbed and further concretised within a variety of aggressive sub-nationalisms that erupted within the subcontinent. In particular, it will try to trace the certitude that informs the aggressive and arbitrarily assumed stances and narratives of the true-believers who are geared to violently obliterate and overwrite the body: the container of sensory conditions and memories, along with their lived histories as well as cultural diversities. Converting the body into an ever-dispensing, performing, producing, projecting, posturing body; rendering the sensing, feeling, intuiting and knowing body gravely insensitive and unknowing!

Recommended Readings: Select chapters from the following books will be read, referred to and discussed during the eight weeks of the course –