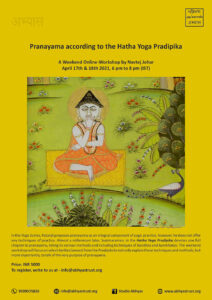 I often begin my yoga classes by proposing that “the body is not alone”. And by this I am alluding to a certain “something”, an atmosphere of sorts, that is both of the body as well as beyond the body, however, it hovers intimately-approximate, intangible, yet palpable, and which offers the body a contended wrap of containment; an atmosphere that I can sense best when in a state of absorption.  Thus, absorption both signifies this state as well as the process of getting to it, i.e. it is both a noun and a verb.  In other words, this condition exists only ifslippage into absorption is allowed,and this requires a willing and unguarded-engagement with and appreciation of this atmosphere. This condition then is an action-noun, where both the object, i.e. the atmosphere, and the subjective condition that actively seeks to resonate with this atmosphere are one and the same.

I also want to state here that this something that I am calling “atmosphere”is neither esoteric nor God. It is a palpable part of the material body that is living, sensing, wishing, desiring and imagining. It is a sense of contented-containment that I might feel in a deeply ponderous or self-reflective moment.

For the Samkhya yogis perhaps this “atmosphere” is nothing other than purusha, an “excess” that is of the body, intimately-approximate yet necessarily-separate from the body. And conversely, the subjective condition that seeks to resonate or correspondence with this “excess” is perhaps none other than the tan-ka-biraha, or that inner-voice-arising-out-of-separation-with-one-immenently-of-the-self, thisis also central to all Punjabi Sufi poetry, be itBaba Farid, Baba Nanak, Baba Bulle Shah and so on. It is important to note that this “inner-voice” of longing is called tan-ka-biraha and not man-ka-biraha, i.e. the voice-of-the-body and not that of the mind.  Yoga for me is striking a fluid and transparent correspondence between these two, my purusha, that is so hoveringly and teasingly close to my sensing-and-awake-body,and at the same time unnoticeably-subtle to the point of being non-existent; and the deeply-private-voice of my biraha that can only emanate from the solitude of my heart. Thereby, making yoga practice inherently poetic! Yes, not moral, not perfectionist, not self-bettering, but poetic!

Hatha yoga that offers us almost all the techniques that we practice today in our yoga classes, be it asana, techniques of pranayama, kumbhaka, bandha, mudra, dharana etc. is an offshoot of Tantra that is rooted in the schools of Kashmir Saivism, and according to which, itsPratibhijnaschool in particular, the spiritual experience is intrinsically poetic.

Thus, we are talking of a state of absorption that is akin immersiveaesthetic-appreciation, a state of partaking a rasa, a spiritually-aesthetic taste, that may fleetingly transport me into the realm of sublimitywhile listening to a strain of music, a piece of haiku, or beholding beauty. A beholding or partakingwhich directly resonates with that ineffable excess within my interiority that is restless for correspondence. Restless for a validation of that something that speech cannot explain but which can be touched, both divulged and heard, through poetic suggestion and resonance.It is this possibility of resonant-correspondence that avails the body its knowledge of not ever being alone.  To reiterate, the body is not alone in the same manner that a poem is not alone without its muse, i.e., a certain something/one that calls the poem into existence.  It is important to remember that the poem like the asana may not have to be a product of labour but a result of thebody becoming available to the call of a muse, an external- poetic-object-real-or-fictitious that corresponds “perfectly” to the inner restlessness of the body.

The aim of yoga, according to the Yoga Sutras is the stilling of the mind, chittavrittinirodha. And this stilling, in the initial stages might require a forced-holding of thoughts, actions and tendencies (YS, 1.15), but eventually it is only when the inner restlessness of the conflictinggunas is effectively disabled, that the purushamay become manifest (YS, 1.16).  And my very strong proposal is that this disabling is not possible, at least in the less advanced stages, without a transparent and an inspired interface with an object of correspondence. Because it is only resonant-correspondence that will eventually satiate and quell the restlessness of the body, a quelling which may then allow the purusha-atmosphere to become palpably noticble. To me, becoming available to the possibility of such a correspondence is integral to the practice of yoga; a correspondence that is deeply stilling, containing and immersive.  It is only in the most advanced state of samadhi, thenirbijasamadhi, when the bija, seed or object becomes redundant and all that remains is sheer correspondence. [1]

Patanjali, in the Yoga Sutras offers many profound and inspirational models of striking such an interface that may tune attention unto correspondence, but the text does not quite commit to a “technique” to arrive at what it proposes.  Almost a millennium later, we find in the hatha texts practical methods and techniques to achieve the aim of such yogic-correspondence. And like the Sutras, one of the methods it offers is pranayama, however in detail.

As the air (breath) moves, so does the mind; when stilled, stillness prevails. Thereby, the yogi obtains a tree-trunk like stillness in the body-mind, leading to the breath (and consequently the mind) to achieve a state of nirodha

I propose that we read nirodha not as mere restraint or inhibition, as we have conventionally learnt, but as stillness-caused-by-absorption.  We have already seen that the Yoga Sutra-s considers pranayama tobe integral to both the models of practice it advocates for the attaining of samadhi, i.e., be it with the inclusion or exclusion of belief in iswara. But in comparison to very succinct mention of pranayama by Patanjali, (YS, 1.34; 2.49-51), Svatmaraman, in the Hatha (Yoga) Pradipika devotes a whole chapter to the various techniques of pranayama that we today incorporate into our practices.

Without going into too much detail, I would like to share some of the salient features of pranayama as proposed in this text.  First and foremost, it makes cleansing the passages of breath as a prerequisite of pranayama. The word used is shuddhi, which effectively means clearing or decluttering the blockages caused by the doshasofvata, pita, kapha. The text suggests also the six kriyas, kapalabhati being one of them, only for those with excessive flab, bile, phlegm or flatulence.

Most interestingly, the text strongly and consistently advocates the practice of kumbhaka, or the retention of breath after inhale.  In fact, it goes to the extent of listing the breathing practices that we normally categorise as pranayama, such as ujjayi, surya-bhedna, shitali, shitkari, bhramarinot as pranayama but as kumbhakas. In effect, it is calling what we term as pranayama,kumbhaka; or in other words it is proposing pranayama for the purpose of kumbhaka.Kumbhaka, which can be either a white-knuckling exercise of holding breath, or else a suspensive-state of absorbed-floatyness, where one might even fleetingly feel a sense of omniscience. He also emphatically reminds us to keep the practice gentle and gradual, yuktam-yuktam and shanayai-shanaihi, or else he warns it can be dangerous.

The chapter consists of 78karikasthat lists all the above-mentionedkumbhaka (or pranayama) techniques and more. But what I want to point to here is not the methods, but the importance of the sattvika condition as thedesirable premise for pranayama. The word sattva is a much tossed-about term in both yoga and Indian dance classrooms. And most often, it is translated as pure. However, it is not only enough to call it “pure”; it can also misleadingly imply notions of Brahmanical purity, which is not at all the point here. Primarily, sattvais an inherent buoyancy, even luminosity, within the body that can be released through finely calibrated, percolated and distilling practices of asana, pranayama, dharana,dhyana and so on. Therefore, itis not a moral condition, though it will inadvertently influence the moral position.

Within the rasa theory of Indian aesthetics, the sattvika bhava consists of involuntary emotional and sensory responses that erupt out of the body and mind on their own accord once the dancer-poet has become unguardedly available to the poetic-provocateur, the vibhava, e.g., Krishna in the case of a poem depicting Radha’s longing for her God-lover. Furthermore, sattvika warrants a state of inspired-buoyancy that allows attention and the imagination to digress from or rise-above the ordinary or personal reality and become susceptible to an impersonal oran extra-ordinary realm; the kind we willingly enter when writing or reading a poem or practicing tantric visualisations or dharanas.  And this inspired-buoyancy goes hand-in-hand with immersion or absorption.

So, as opposed to talking of correct techniques of “doing” pranayamapractices in order to further perfect them, I want to focus on the importance of becoming available to the immersive enterprise within the practice of breathing, pretty much like the poet subjects herself to the muse or to the imagined poetic-object,vibhava, for inspired poetry to buoyantly pour forth involuntarily, despite the self.  What I am trying to suggest is, that like the poetic impulse, breath too can be inspired; and therefore, propose that the yogi bring the breathing body into an interface with “something”other while practicing.  A “something” with a calling that corresponds just-so to the restlessness of my breath and that of my elemental body, for the purpose of a arriving at an immersive experience of contented-containment that is marked by buoyancy, dispassion (vairagya), clarity and lightness. Like vibhava,the poetic object that effortlessly elicits poetry out of the poet, the Pradipika mentions ashriya, an object of support in reference to kumbhaka or pranayama. The highest form of kumbhaka, the kevala-kumbhaka, when “without exhalation or inhalation, the breath is retained with ease” (HYP, 2:73-74), is a suspensive and immersive state where the breath becomes anashriya, without support. Pretty much like thekaivalyam state of nirbeejasamadhi talked of in the Yoga Sutras, where Consciousness gets immersively-absorbed within itself, not needed the support of any external beeja or seed-object.  It is this beyond-buoyancy state of supportless immersive-absorption that is called Raja yoga by Svatmaraman (not to be confused with the Raja yoga of Swami Vivekananda which is marked by notions of correctness and strife).

Thus, the body, rather theprakriti of the body, is not alone because it has within it an inherent-appetite that already seeks immersive-correspondence with an object, that may emerge only within a state of absorption, namely the vibhava, the ashreya, the purusha. And because of this reality, the potential of immersive-containment is always available to the body at any given time. And to tune into it, it does not need to exceedingly strive, better or perfect itself, it just has “be” and become available.  Become available to that what it can palpably see. Yoga, as I repeatedly say in my classes, is not about “doing” but more a practice of “seeing”, seeing the palpable reality sensorially, imaginatively, poetically. See it I must, only then will be become alive to my consciousness,and when and if it becomes alive it brings life to me through the sweet possibility of correspondence. Therefore, let pranayama be an alert but equally a ponderous practice. A practice not seeking perfection of technique or morality; which to my mind is not only an impossible but a violent idea, but seeking sweet deliverance unto the realm of correspondence, where my breath will perhaps no longer remainjust mine.

This article was written in conjunction for the workshop- Pranayama according to Hatha Yoga Pradipikawhich Navtej Johar offered in April 2021. He will be offering more workshops based on the Pradipika over the coming months.

[1] Within the school of Poetics in Kashmir Saivism, the aesthetic-experience ofshanta rasa holds the promise of immersive aesthetic-taste that is stilling, and may fleetingly bear a resemblance to .